Exactly one year ago the Coronavirus started spreading through Europe like wildfire. Lockdowns were ordered, restrictions were imposed on the general population. Many industries such as the restaurant furniture industry suffered, the economy in most countries went through a downward spiral, the world just stopped. However, a slight upside to this horrendous situation is that CO2 emissions began decreasing. In fact, in April of 2020 they dropped by 4% which was a bigger annual drop compared to previous economic crisis or any of the two World Wars. This was the lowest figure for carbon dioxide emissions since 1945 and still wasn’t enough to even limit the effect of global warming. The UN calculated that emissions need to decrease by 6% every year in order to even remotely stand a chance of meeting the goals of the Paris agreement. Many experts foresaw that without implementing structural changes worldwide those low statistics could not be sustained and they were correct.  For example, in China the CO2 emissions were reportedly reduced by 25% when the country first introduced its strict COVID-19 restrictions, however, they quickly returned to normal figures, once the country re-emerged from lockdown.

In the first quarter of 2020 Carbon dioxide emissions were 5% lower compared to the first quarter of 2019. An 8% reduction in emissions from coal, 4.5 % from oil and 2.3 % from natural gas resulted in one of the most significant declines in energy demand and CO2 emissions in history. Logically, the emissions were lowered the most in the countries which suffered the earliest and most devastating impacts of the Coronavirus – namely China, the US and Italy. 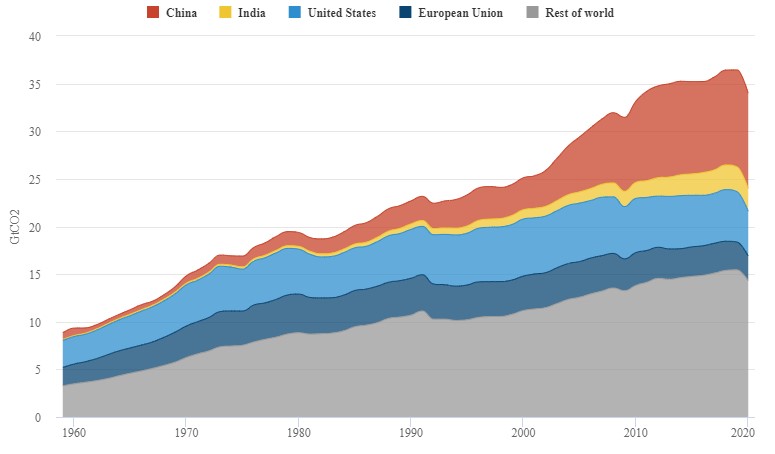 Following the crisis however, there was a huge increase in CO2 emissions in early 2010. Then a further increase in 2015, which stabilized for a while, leading experts to believe that worldwide emission have reached their final heights. That belief was disproved soon as carbon dioxide emissions rose again in 2017 and again in 2018, before further reaching a peak in 2019. Further talks were held whether this peak was final or there were more incoming, at that point certain countries had already made progress by implementing programs which aimed to reduce CO2 emissions. Obviously, it is impossible to know whether there was indeed another increase coming as the effect of the pandemic nullified any chances of finding that out anytime soon. A new report noted that CO2 emissions have progressively escalated each decade since the 60s. There were some slight drops between 1960 and 1990, however that trend ended with a significant increase of 3% per year in the beginning of the 21st century. Although, emissions have substantially increased, per capita emissions have remained low in the past decade this is demonstrated in the chart below which shows worldwide average per capita emissions. 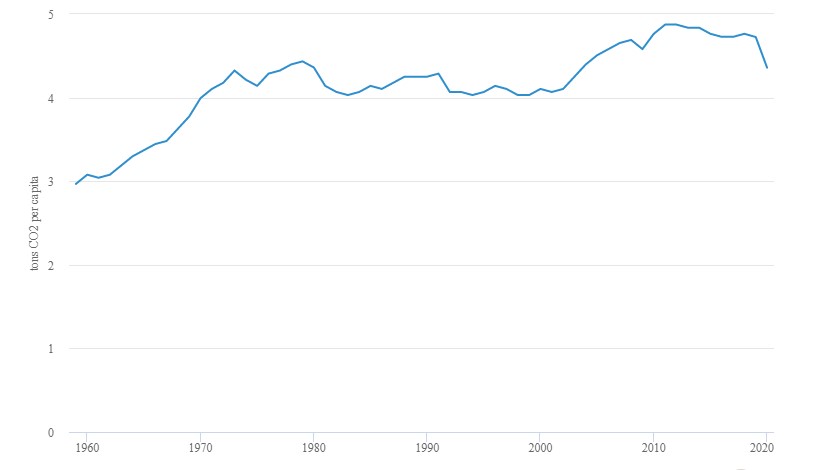 In December of 2020 it was the 5-year anniversary of the Paris agreement on which experts speculated that while there was a significant decline in CO2 emissions, based on financial crises in the past, there will be a rebound. It also depends on how countries will handle their economies post the Coronavirus to maintain a relatively low increase of carbon dioxide emissions. Concerning the economy and its effect on emissions, is expected that nothing will change in 2021. However financial stimulus packages will play a huge role. The massive impact of the pandemic means that a re-surge of emission figures is highly likely, but it cannot be foreseen if the numbers will be the same as in 2019 or be even bigger. It is estimated that in order to limit the effect of global warming there needs to be a yearly decrease of 2% of CO2 emissions over the next 20 to 30 years. The current situation with the drop of emissions, the planned economic stimulus packages and the newly accepted climate policies, presents a great opportunity to make significant changes and reduce CO2 emissions globally. After a steady increase for the past 6 decades, the Carbon dioxide emission finally had a significant drop as the 2020 pandemic put a stop to all economic and social activities all across the world. The emissions decrease is huge, almost double Japan’s yearly emissions, however, it is not as massive as many experts believed it would be, considering the global effect of the pandemic. The US were the biggest contributor to the reduction of CO2 emissions due to the decrease of transportation which began with most lockdowns – in March. Worldwide, aviation emissions fell by 48% from 2019, as most countries were in a complete lockdown and didn’t allow international travelling. 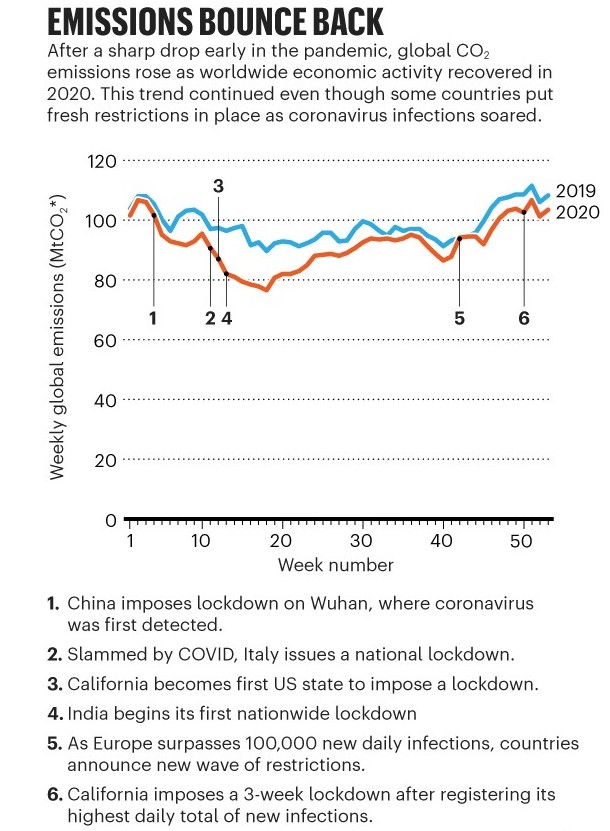 The resurgence of CO2 emissions was inevitable and was made evident in late 2020 when economies received a boost due to energy demand, such was the case in China. It was the first major economy to lift restrictions and get out of the pandemic and there was an immediate 7% increase in carbon dioxide emissions.

In China, which is the largest country in the energy industry and was the first be affected by COVID-19, carbon dioxide emissions dropped by 12% in February which was relatively the same as last year. In April, the country’s economy recovered and the emissions began increasing for the rest of the year kept a 5% higher average compared to 2019. COVID-19 impact on CO2 emissions &nbspsuccessfully added to your cart!